3. Zionist movement after the White Paper 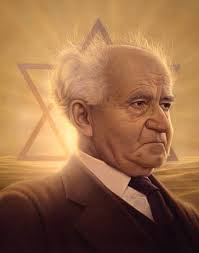 The day after the White Paper was issued Jews demonstrated throughout Palestine. A feeling began to develop in the Jewish community that this new British policy should be resisted with all means at its disposal. The White Paper was seen as an act of betrayal and treachery.[1] Though some hope was still left that the British might reverse their policy again, especially because of the strong support of Zionism by the British Labour Party and because of the negative attitude of the Permanent Mandates Commission towards the Paper, indignation and excitement were great in Palestine.[2] On behalf of the Jewish Agency, Ben Gurion declared to

…regard this policy as a breach of faith and surrender to Arab terrorism [...] It is a policy in which the Jewish people will not acquiesce. The new regime now announced will be devoid of any moral basis and contrary to international law. Such a regime can only be established and maintained by force. […] It seems only too probable that the Jews would fight rather than submit to Arab rule. And repressing a Jewish rebellion against British policy would be as unpleasant a task as the repression of the Arab rebellion has been. The Government has disregarded this warning.
The Jewish people have no quarrel with the Arab people. Jewish work in Palestine has not had an adverse effect upon the life and progress of the Arab people. The Arabs are not landless or homeless as are the Jews. They are not in need on emigration. Jewish colonization has benefited Palestine and all its inhabitants. […]
The Jewish people has shown its will to peace even during the years of disturbances It has not given way to temptation and had not retaliated to Arab violence. But neither have the Jews submitted to terror nor will they submit to it even after the Mandatory has decided to reward the terrorists by surrendering the Jewish National home.
It is in the darkest hour of Jewish history that the British Government proposes to deprive the Jews of their last hope and to close the road back to their homeland. It is a cruel blow. […] This blow will not subdue the Jewish people. The historic bond between the people and the land of Israel cannot be broken. The Jews will never accept the closing to them of the gates of Palestine nor let their National Home be converted into a ghetto. The Jewish pioneers […] will from now on display [...] strength in defending Jewish immigration, the Jewish Home and Jewish freedom.[3]

Weizmann, writing on 31 May to the High Commissioner, concluded with the same warning as Ben Gurion’s statement did. ‘Force has […] been used to prevent Jews entering Palestine; it may have to be used on an even greater scale in the future if the policy outlined in the White Paper is to be carried out in full.’[4]

Particularly among the youth, many argued that only Jewish terrorism would coerce the Mandatory to abandon its policy. The White Paper itself was thought to prove that terrorism pays. Shortly after its publication, Jewish terrorists damaged Government buildings in Jerusalem and Tel Aviv, followed by other acts of sabotage and murder. Responsible for this was the Revisionist Irgun Zvai Le‘umi (National Military Organization), or Irgun, which was able to expand its ranks because of the growing tendency in the Jewish community to advocate the use of more forceful means to extend the National Home into an independent Jewish state.[5]

Ben Gurion was the main architect of the future Zionist policy which was publicized on the eve of the publication of the White Paper. It was decided not to participate in Government institutions which had to deal with the minority status of the Jews. Laws designated to decrease or halt immigration and settlement were considered to be illegal, so they were not binding for the Jews. Unjustly so-called ‘illegal immigration’ would be intensified. Laws against fundamental Jewish rights were invalid and unacceptable for any Zionist. Immigration would also lead to a stronger position in case open revolt against Britain in Palestine would be considered inevitable.[6]

During the Twenty-first Zionist Congress, which met at Geneva from 16-24 August 1939, most delegates supported this policy of the Jewish Agency Executive against those who wanted a stronger anti-British stand and those who wanted to remain more firmly on British side. The Congress declared its uncompromising hostility to the White Paper, while at the same time proclaiming its unwavering support of Great Britain in its defense of the Western democracies.[7] On the third day of the Congress, Weizmann wrote to Chamberlain from Geneva

…to confirm in the most explicit manner [...] that the Jews stand by Great Britain and will fight on the side of the democracies. […] The Jewish Agency is ready to enter into immediate arrangements for utilizing Jewish manpower, technical abilities, resources, etc.[8]

Although rejecting the White Paper and propagating illegal mass immigration, the Twenty-first Zionist Congress affirmed ‘…the resolve of the Jewish people to establish relations of mutual goodwill and cooperation with the Arabs of Palestine and of the neighbouring countries.’[9] The Congress therefore instructed the Executive to appoint a special committee to study Jewish-Arab relations in the social and cultural fields and to explore the possibilities of cooperation in these different areas.[10]

The concept of parity, still advocated during the London Conference by Weizmann on behalf of the Jewish delegation, was not mentioned anymore in any official statement of the Zionist movement. The London Conference was the last time Zionist spokesmen promoted parity, or Bi-nationalism, as the desirable policy. Not that they really opted for parity as a strategic choice, but the idea was proposed in negotiations because it appeared to be a lesser evil than minority status.[11] The Zionists only saw parity as a means to make the British accept an Arab minority position in Palestine. In 1936 Moshe Shertok [12], head of the Jewish Agency Political Department, had said that ‘[the] connection between parity and immigration is that parity is at the moment one of our strongest weapons in the war for immigration.’[13] Another Zionist supporter said in that same year that ‘there are people who think that parity means stabilizing our numbers. I believe the exact opposite. Parity means the possibility for us to become a majority.’[14] When it was obvious that neither the British nor the Arabs would allow the Jews to become a majority in Palestine, parity was rejected as an insufficient guarantee against an Arab majority rule.[15]

By openly sanctioning illegal immigration and accepting the possibility of a future revolt against Britain, the Zionist movement had come much closer to the Revisionist position than before 1939. Until 1938 only Revisionist dealt with illegal immigration, while the broad Zionist movement had always opposed it.[16] This policy, adopted by the Zionist Congress, ended a phase of many years of lingering Anglo-Jewish cooperation in the peaceful establishment of the national Home.[17] Historian Alan R. Taylor describes that phase as the ‘gradual forwarding of Zionism’s aims as a result of the continuing success of Zionist diplomacy with the British.’[18]

After the White Paper, the Mandate no longer served to forward the aims of Zionism, but even threatened to thwart he fulfillment of one of Zionism’s primary goals, that is the creation of a Jewish majority in Palestine through immigration.[19] The only possibility to continue the development of the National Home after 1939 was to shift Zionist policy from cooperation with to hostility against the British.[20]

To change Britain’s policy, another shift took place. Zionist leaders turned to the United States, seeking to bring American pressure to bear on British policy. Gradually, as the war seemed to spell out the end of the imperial power of Britain, Zionism saw its greater hope in the United States, not just to change British policy, but as a more important power in the world to help fulfill Zionism’s goals.[21] America became the focal point of Zionist activity.[22]

A third shift took place in the Zionist movement, effectuated by the looming war. When the Congress heard of the Russo-German non-aggression pact on 23 August, war seemed inevitable. In a hurry the Congress was finished and some emergency measures were taken. During the time of emergency an Inner General Council, consisting of members or deputy-members of the General Council residing in Palestine, would be in authority of the Zionist movement. The old Executive was re-elected. In the Jewish Agency something similar happened. The Agency Council that was originally scheduled to meet 30 August, did not meet anymore. The Executive continued in office. The Agency passed into full control of the Zionists, as two of the four non-Zionist members withdrew in 1939 because of organizational differences. Added to these differences these two Americans resented the fact that their attitude toward the Mandatory and the Arabs was not sufficiently taken into account. Of the remaining two non-Zionists, Werner Senator [23], a Bi-nationalist, had no portfolio.[24] This development served to add cohesion and integration to Zionism at a time that called for close organization and full freedom of action.[25]