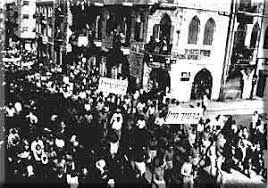 For the Jewish delegation at the London Conference, the proposals of MacDonald were totally unacceptable, so it was decided to dissolve. The fears that were expressed before the Conference, about British intentions, had proved to be true. As the British did not immediately publish an official White Paper stating their future policy, the Zionists did all they could to prevent or delay its publication.[1] Weizmann asked Chamberlain in a letter to postpone the announcement of any decision:

In times so deeply disturbed, could we not avoid adding to the turmoil. For such would be the result of putting forward a policy which satisfies no one. If the announcement of the decision is postponed, I do not mean to leave the time unused. Every effort will be made [...] and contact used to explore the possibilities of Jewish-Arab agreement or rapprochement. […] Lapse of time may open possibilities in this direction.[2]

Times were disturbed indeed. In Europe, prospects for peace had dwindled. Following the German annexation of parts of Czechoslovakia on 15 March, Italy invaded Albania on 7 April. The announcement of the formation of a Berlin-Rome political and military axis was shocking. The British Government faced a popular demand for an end to appeasement, so Hitler’s move against Czechoslovakia was answered by making plain Britain’s determination to resist any further aggression. Chamberlain reversed his European policy on 31 March, by giving a military guarantee to Poland, and shortly thereafter also to Rumania and Greece.[3]

Britain could not give in to Zionist pressures not to go on with the proposed policies in Palestine. In case of war, the Jews would have no choice to be on the British side, while the Arabs had to be kept out of the fascist fold.[4] The Arab rejection of the proposals had been less extreme than the Zionists’ rejection, as some of their demands had been at least partially met. For that reason the British Government could continue to confer with the governments of Iraq, Egypt and Saudi Arabia. These states formulated, with the consent of the Palestinian Arabs, some amendments on the proposals, after conversations in Cairo in April, and gave these to the British.[5]

Finally, on 17 May 1939, the White Paper was published.[6] Although the discussion in Cairo resulted in the modification of detail, the White Paper was in most particulars virtually identical with the draft of 15 March. One of the differences was that the White Paper did not mention the possible federal nature of the future independent state. The Bi-national character of the future independent Palestine was, however, stressed again. The White Paper said that ‘…the independent state should be one in which Arabs and Jews share in government in such a way as to ensure that the essential interests of each community are safeguarded.’[7] Probably to give in to Arab demands the sentence that Palestine would not become either a Jewish nor an Arab state was left out of the declaration of intentions, although the idea was explicitly stated in the introductory paragraphs of the White Paper.[8] 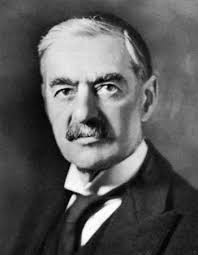 In Britain the White Paper met with serious criticism. The press was almost uniformly hostile. The Manchester Guardian for instance, spoke of a ‘disastrous’ policy.[9] In Parliament, Chamberlain was attacked by a large minority when he asked for a vote of confidence. On 22 May, numerous pro-Zionist spokesmen accused the Government of appeasing the aggressors, while some even went so far as to now advocate Jewish resistance and terrorism. Winston Churchill attacked his own Conservative Government, calling the White Paper a unilateral denunciation of a pledge made not only to the Jews of Palestine but to the whole Jewish people.[10]

Herbert Morrison, the Labour Party leader, spoke of the Jews being sacrificed to the

Government’s incompetence and declared that if Labour would replace the Conservative Government it would not automatically be bound by the White Paper. His Labour Party friends applauded loudly.[11] Only because of a reluctance to embarrass the Government at that time of great international tension, many Members of Parliament abstained from voting against Chamberlain. Because of these many abstentions the Cabinet was able to survive with fewer votes than half of the numbers of MPs.[12]

A few days later the British Labour Party at its annual conference supported its representatives in Parliament in their struggle against the White Paper. In a resolution they declared that

...the policy of the White Paper represents a further surrender to aggression, places a premium on violence and terror, and is a setback to the progressive forces among both Arabs and Jews. It also imposes new and intolerable restrictions on Jewish immigration at a moment when racial persecution increasingly divides the other countries of the world into those Jews are forbidden to enter and those in which they find it impossible to live.[13]

Chamberlain not only needed approval of Parliament but also of the Permanent Mandates Commission of the League of Nations. The major function of this Commission was to report to the Council of the League whether the Mandatory Powers were acting within the terms of the mandate. For this reason MacDonald personally appeared at the three sessions devoted to Palestine and the White Paper in June 1939. The aim of MacDonald was to prove that the White Paper was not inconsistent with the obligations under the mandate. The change in policy was in his opinion no departure from the letter or the spirit of the mandate, but only an adaptation to changing circumstances. He argued: ‘While in the early years it was right to have laid the emphasis on the obligation to the Jews, it was no right to lay the emphasis on the obligation to the non-Jews.’[14] MacDonald was not able to convince the Commission. In its report to the Council of the League the Commission declared that

…the policy set out in the White Paper is not in accordance with the interpretation which, in agreement with the Mandatory Power and the Council, the Commission had placed upon the Palestine Mandate.[15]

The British prepared to defend their position against the advice of the Permanent Mandates Commission. Next session of the League’s Council was planned to be held in September. The outbreak of war in Europe led to the suspension of the activities of the League, so no decision was taken. From then on Britain based its policies on the White Paper without the legal ratification that was needed of the League of Nations.[16]

Whether or not the White Paper was consistent with the Mandate, the London Conference and the resulting White Paper of 1939 were the culmination of a gradual change in Britain’s policy. Until 1939 it had been relatively friendly and generous towards the further growth of the Jewish National Home. After 1939 British policy was essentially the reverse.[17]